On Rotation: Or Why Not To Worry About Joel Campbell 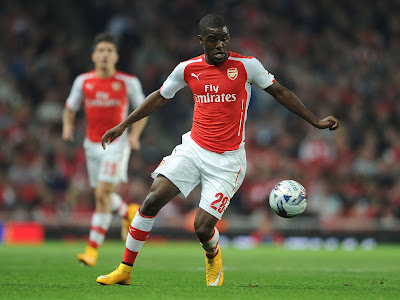 Ask Arsenal fans who their favourite player of the last fifteen years is, and the chances are a reasonable proportion will pick Thierry Henry. While Henry was obviously a brilliant player, much of the unequivocal positivity about his Arsenal career stems from the lack of internet streams ten years ago. Because in Henry’s last couple of seasons, he was often very poor away from home in matches which the vast majority of fans only saw brief highlights of. In 2005-06, he scored in just three away League games all season. This was a large part of why Arsenal struggled, winning just six of nineteen away games. While in 2006-07 he had his injury problems, again he scored in just three away games.

The main reason for this was that he often wasn’t really trying. Sometimes, this didn’t matter: back then, the gap between the best teams in the League and the rest was far larger. But sometimes it did, and it was why Arsenal struggled away in 2005-06 while continuing to be near-imperious at home.

Perhaps Henry wasn’t trying because he knew his body was going and he was trying to save himself for games which ‘mattered’. Perhaps it was because he’s a narcissist and only really wanted to turn it on in front of his idolising fans. In all likelihood, we will never know.

Either way, Henry’s uncommitted performances are not the case for rotation. But they do indicate how the rise of internet streams combined with 24/7 coverage and discussion of football on social media channels has changed how we view footballers. (Yes, I’m fully aware of the irony of criticising internet coverage of football on my blog).

But what the internet has done has made every performance be subject to the utmost scrutiny. Where in the past maybe 6/19 away games would be televised, now people watch every single one of them, and far more people than those at the Emirates can watch home games. In the past, if a player was getting fifteen minutes here and there, it was understandable they weren’t showing their best compared to a player who plays every week. Judging footballers on this metric and deciding they’re rubbish is absurd: clearly Kieran Gibbs isn’t as good as Nacho Monreal but he isn’t terrible; when you stop doing any activity for a while, you become rusty, but you don’t permanently lose your skills - my French is currently not what it once was, but if I spent a few weeks in France, I’m sure it would come back to me. Now, with video analysis on blogs and the sheer quantity of football coverage, people are insistent on analysing these performances as if they are a reasonable indicator of a players’ actual talent.

This lack of understanding of why somebody might be playing badly is compounded by Twitter. The view of players is binary, they’re either great or shit, almost out of necessity for a 140 character limit. Mathieu Flamini came in and had a few good games at the beginning of the 2013-14 season and people claimed he was world class. He had a few bad games and people acted like he was the worst player ever to play for Arsenal.

Of course rotation involves bringing in players who fit less well into the team. But that doesn’t mean they are completely useless. The starkest case of this is the current imbroglio of Joel Campbell coming into the team due to a series of injuries on the right wing. After the World Cup, Campbell was heralded as the best central American talent in world football. A few poor games for Arsenal and people act like he’s rubbish, pointing to his lack of goals and assists. If I wanted to make the case for Campbell, I could point out how his pressing and positional diligence was definitely a contributory factor in Arsenal scoring a series of goals after he came on as a sub, such as away against Anderlecht last season, and that he’s actually done quite well.

But the broader point is that all players tend to struggle when they’re given fifteen minutes at a time here and there: the reason players like Henry and Dennis Bergkamp were described as having a telepathic connection was that they had played together so much, they did just know what the other would do and were therefore always one step ahead. Not all players can have such a relationship, but game-time is what helps develop this, and it’s unsurprising that the less people play, the worse they perform when they come into the team. The whole concept of a super-sub took off because it was rare, and most substitutes have very little impact. Clearly, for the most part it is useful to keep the nucleus of a team together, because they are the best players and are the most used to playing together.

Despite the modern football fan’s obsession with tactics, stamina remains vital. When Man City scored their winning goal against Seville last week, journalists reacted taking the piss out of the effort put in by the defenders:

What they seemed to be missing was that the players probably actually were knackered. They had just run around for 90 minutes in a difficult away game against one of the best attacking teams in Europe who were desperate for a result. And while stamina is important within individual games, stamina and fitness also have a massive impact overall: it’s the extra bit of juice in the legs which allows players to burst past an opposition player and to turn 50/50 duels into 60/40 in their favour. That’s what you get from rotation: the hope that your best players will be at their best in the most important games come the end of the season.

The alternative to rotating is what’s currently on show at Chelsea: a refusal to rotate, leading to players being tired in the second half of the season and not performing at the level they should do. The knock-on effect of this was a truncated pre-season this year to try and spread fitness work throughout the season, resulting in players being unfit and well, look at where Chelsea are now.

But the critical thing to realise is that failing to rotate makes it much harder to sign and keep players. Why does Kevin de Bruyne no longer play for Chelsea? Because in autumn 2013 he could barely get a single game. Jose Mourinho picked the same players over and over again last season and guess what happened? Squad players like Andre Schurrle and Filipe Luis wanted out, and Chelsea struggled to sign squad players this summer because footballers want to play and were aware of the limited opportunities they would get under Mourinho. This presumably is how they ended up with Papy Djilobodji as a last resort.

The clearest example of not giving players a chance was Juan Cuadrado, who clearly isn’t a bad player. Perhaps not worth £24 million, but certainly not somebody who wouldn’t be useful as a squad player. But he was afforded just four starts in a new team in a new League before he was binned off for not being quite up to scratch. In Chelsea’s case, it may have been a specific case of mismanagement, but the broader premise that keeping squad players happy is vital is a sound one.

I don’t expect Joel Campbell to be the man of the match this weekend, but nor do I expect him to disgrace himself. A little understanding that players might be a bit worse than those who you would pick in the first eleven, while still quite good at the football would go a long way.